I am on the shore of Lago Buenos Aires, in front of a crackling fire on a beautiful autumn evening (late April) in Los Antiguos.  At a southern latitude equal to Quebec City (Canada)  in North America, it is 70 degrees one month into Argentina’s autumn, but the fire feels nice now that a breeze off the lake chills the air. After a 13-hour bus ride from El Chalten on Argentina’s legendary (mostly unpaved) Ruta 40, through the near-desert steppe of Patagonia, entering this oasis of alumina trees (cousin to poplar), cone laden pines and the startling blue of Lago Buenos Aires is surprising. It doesn’t matter what you read, reality is always more intense.

Los Antiguos is one of the lucky regions on Earth  – a microclimate – those areas that possess an environment warmer than they deserve given their latitude and/or altitude. In Los Antiguos’ favor this means a rich agricultural area for fruit with dozens of profitable farms. Being on one of the nation’s most beautiful lakes, Lago Buenos Aires, certainly doesn’t hurt.

A mere 1-1/2 miles from the Chilean border, in the foothills of the Andes, at an altitude of 700 feet, Los Antiguos is the cherry growing capital of Argentina. In January they celebrate with the National Festival of the Cherry. In October, their cherry blossoms blanket this village of 2,500 people. In summer, the population swells filling the modest number of hosterias in town with visitors from Argentina and Europe but less than 1% from North America.

Having visited a number of beautiful Argentine towns, I am surprised that Los Antiguos isn’t more developed for tourism. I saw only a small number of lake-side summer homes and a half dozen nondescript hotels in town.  The Hosteria Antiquo Patagonia is the only hotel on this vast lake, at the town’s entrance, but it’s a gem! There is only one road into the village from the closest larger town, Perito Merino, with bus service from Route 40 making it not as attractive to tourism. From mid-May through September (the Andean winter) nearly everything related to tourism closes. Yet its climate remains moderate with winter temperatures rarely falling below freezing and summer topping out at 80 degrees.

It’s a paradox because this is a retreat, but if it was more accessible it wouldn’t be a retreat. There are no dramatic mountains to trek and, although I’m told there are some good restaurants open in the summer season, what is available now is nothing to write about – decent but not exciting. Yet there’s a peace that I would seek if I were a busy Buenos Aires professional who desired a mid-winter escape in front of a crackling fire on a beautiful lake…but you know what’s said about having fantasies fulfilled.

From September through April, you can visit most of the farms, the “chacras,” but I had the great pleasure on this beautiful late April autumn day of having a personal tour of Chacra Don Neno.

Dona Malu Cienfuegos met me as I walked into her garden. She was not expecting me. She simply saw me from the glass wall of her kitchen where she was jarring one of her many creations from the fruits and vegetables she and her husband, Walter Treffinger, grow on their 15 acre farm. Dona Malu is the 4th generation of Cienfuegos’ to own and farm Chacra Don Neno.

I already knew that Chacra Don Neno was one of the few Los Antiguos farms that remained open all year for visitors to purchase products. Naturally, seeing that in the first month of autumn so much of Los Anteguos was closed for the season, I assumed Don Neno would be a tourist store with everything but “real” food. 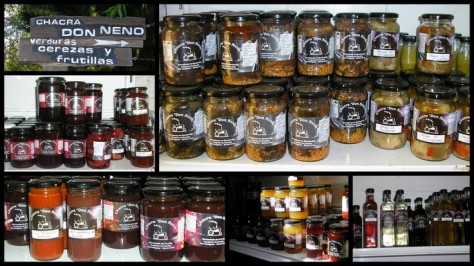 Assumptions are made to be broken. Dona Malu’s store is a small structure stocked full of several dozen chutneys, jams, conserves, escabeches, honey and liquors. Many are old family recipes. Everything, down to the herbs that flavor these incredible creations, is grown on the farm.

Dona Malu asked why is an American visiting Los Antiquos?  I explained my mission and handed her my card.  She immediately beckoned me out of the shop to her fields. With her English as basic as I knew Spanish we communicated on a food level just fine.

My first question was about pesticides. “NO!” was her strong response.  Pesticides, fungicides and non-organic fertilizers are unnecessary in this microclimate and rarely used by any Argentine farmer. Particularly in this microclimate there simply are no pests. Water for the fields comes from the Rio Mayo that’s fed from the glacier water of Lago Buenos Aires through a system of irrigation canals.

In garden-like arrangements, Dona Malu showed me orchards of apple, cherry, apricot, figs, raspberries, strawberries, as well as Andean varieties that are cousins of these soft berries, quince, Andean melons, sweet and hot peppers, almond, hazelnut, rose hip, rosemary, basil, wormwood (the herb basic to vermouth), oregano, edible flowers, the plots for tomatoes, spinach, eggplant, onions, garlic and other vegetables, lavender, asparagus, anise, horseradish, grapes, fava beans, and thyme. All the plots are protected from any harsh winter winds by towering alumina trees, cousins to the poplar. Dona Malu cooks and jars her creations in a small, pristine kitchen with modern commercial equipment and showed me a new, larger kitchen facility under construction.

Organic is a word used for tourists; Argentines accept it as the norm.

To read more about Argentina – this fascinating 5th largest nation on Earth –  you can visit my web site: http://www.travel-with-pen-and-palate-argentina.com/

One thought on “Where organic is a word used for tourists: Los Antiguos, Argentina”

The “Bridge of Love” in Puerto Vallarta was designed as a replica of Venice’s Bridge of Sighs and connects Casa Kimberly (left) to the more modest house owned by Richard Burton. Burton bought Casa Kimberly in the 1960s for Elizbeth Taylor. It connected the 2 houses through both their marriages, divorces & remarriages. The two houses today are the @casakimberly boutique hotel in El Centro‘s “Gringo Gulch” ... just down the street from my home. PV is full of stories. @visitpuertovallarta #hollywoodlegends #architecture #historicdistrict
Had dinner last night at a hidden gem in @visitpuertovallarta La Fina Cocina de Barrio. It’s a small place with outsized imagination. After my forthcoming article it may not be “hidden” for long. @la_fina_cocina_de_barrio #mexicanrestaurants #hiddengem #foodiefriday
A #throwbackthursday photo from inside the Museo de Sitio de la Cultura Teotihuacana looking over a scale model of #teotihuacan out onto the nearly 2,000 year old Pyramid of the Sun - 3rd largest in the world. #archaeology #mexicanheritage #mexicantravel #culturaltravel
1st Birthday’s are monumental 🥳 & my #granddaughter Elena Lucia d’Entremont celebrates in style. 😘 (I’ll meet her for the 1st time in January.)
I’m not a #vegan; I’m a #chef who likes & will eat just about anything. I enjoy #vegetarian & vegan dishes as much as a grilled rib eye. In Puerto Vallarta I often hear from visitors that “Mexicans only eat meat,” but a few hours at any market will end that myth. Many restaurants offer vegetarian & vegan options such as this savory, aromatic & filling #cauliflower #curry by Qulture’s Chef Diego Gomez - one of several vegetable protein selections on the #menu that make @qulturepv a #foodie destination in @visitpuertovallarta @chef_diegogmz #veganfood #mexicanrestaurants #culinarytravel #hometownfood #destinationrestaurant
The rainy season is over in Puerto Vallarta, #mexico, and flowering plants are starting their dry season/winter long riot of colors, such as these #Bougainvillea. #tropicalplants #tropicalvibes #viewfrommywindow #tropicallife @visitpuertovallarta
The newest wall mural to brighten an already art filled Puerto Vallarta. You’ll find this one at the intersection of Calle Iturbe & Calle Juarez in El Centro @visitpuertovallarta. #streetart #wallmurals #urbanlandscape #mexicanart
La Cigale French Bistro in El Centro, Puerto Vallarta, Mexico serves classic #bistro cuisine in a charming atmosphere both on their terrace & dining room. (1) #artichokes were steamed then char grilled adding an aromatic smoked flavor. (2) Vol au vent pastry was filled with #scallops & #mushrooms in a #champaign sauce. @cigale_french_bistro @visitpuertovallarta #frenchrestaurant #foodiefriday
Dubbed the “marble fields of Greece” the Greek & allied World War 1 military #cemetaries offer a sober reminder of the pain of war. (1) Zeitenlik Allied Military Cemetery, Thessaloniki (2) Dorian Military Cemetery, Lake Dorian, Macedonia (3) Lambet Road Military Cemetery, Thessaloniki. #worldwar1 #greekhistory #remembrenceday #veteransday #costofwar #throwbackthursday #greektravel
Today is the 3rd anniversary of Qulture, Puerto Vallarta’s unique restaurant & art gallery, which represents 17 artists who display their works & work in individual studios in a historic early 20th century building. This #mesoamerican inspired paper mache head is by artist Chez Manaca. @qulturepv @visitpuertovallarta #localartists #mexicotoday
I always enjoy walking past the potted garden that decorates Florios Restaurant in El Centro @visitpuertovallarta @floriosvallarta #streetscape #urbangarden
...and the #wave rolls in at the #malecon @visitpuertovallarta #bahiadebanderas #mexicomagico #pacificocean
November 3 is National Sandwich Day! I love sandwiches. The Earl of Sandwich popularized this fast food (in its present form) In the mid-1700s, and it swept the world. I probably eat a sandwich a day ranging from raw herring to the ubiquitous ham and cheese. And I seek out interesting sandwiches during my travels. Here’s a small selection:
Walking down Calle Mina (block over from home) to Gaby’s for their classic Chicken Mole @restaurantgabys #mexicanfood #chickenmole #foodiefriday
Fishermen with #seagull “crew” along for the bounty in the #bahiadebanderas @visitpuertovallarta #mondaymorning
Memories of the Argentine resort city of #Bariloche offers panoramic views of Lago Nahuel Huapi & the snow capped #andesmountains. @visitargentina #skiresort #southamericantravel #argentinelakedistrict
Paintings by Curioso and coconut shrimp by Chef Diego Gomez. Enjoy both at Qulture, Puerto Vallarta’s only #restaurant #artgallery. @qulturepv @visitpuertovallarta
On a trip to Costa Rica (2016) I was taken down the Sierpe River to Corcovado National Park - an enclave containing 2.5% of Earth’s biodiversity. Of course there are always some where social distancing is recommended...
Sunsets are always fascinating since no 2 are ever alike even on the same day no matter where on Earth. For #sunsetsunday here’s a collection from my travels. (1) the Dead Sea, Jordon (2) Eastern Highlands, Zimbabwe, (3) Puerto Vallarta, Mexico (4) Dublin, Ireland (5) Over the Mekong River, Laos (6) Pula, Croatia, (7) on top of Mt. Athos, Greece. #internationaltravel #nature_brilliance
Mango ... 😋 #tropicalfruit