The estuary of the Thu Bon River is a watery maze of emerald green islands opening within a mile onto the South China Sea. For over one thousand years its villages prospered as major ports feeding the Champa Kingdom with trade, especially from China and Japan, superb fish and seafood. The decline of Champa gave rise to Vietnam’s influence, continued China/Japan trade and, by the 15th century, new Dutch, Portuguese and Spanish trading houses. The village of Hội An was a hot item on the South China seacoast.

As prosperity increased both population and agricultural production and given the fickle nature of alluvial rivers, the Thu Bon River began to fill with silt making navigation by ocean-going vessels difficult. By the early 19th century the port of Da Nang was replacing Hội An as the area’s major international trade center. The town slowly sank into obscurity sustained by the accumulated wealth of old merchant families and its abundant seafood and agricultural products. Its old 18 and 19th century cypress and ironwood buildings remained intact impervious to the river’s floods and their owners inability to modernize. More remarkable was that during the wars of the 20th century while Da Nang was in the middle as the site of both a major port and airport, Hội An a mere 10 miles south, was hidden among the reed covered islands of the Thu Bon estuary.

The silting of the river that threw Hoi An into a time warp allowed it to emerge after 1975 as the most intact pre-19th century village in Vietnam. In 1999, the Old Town was declared a UNESCO World Heritage Site as an example of a Southeast Asian trading port of the 15th to 19th centuries.  Some decry the “preserved-for-tourist” nature of the Old Town with its rows of shops and cafes in the old buildings. Yet the reality remains that Hoi An is today what made it famous centuries ago – a busy merchant town. With a population of 120,000, it’s once more a prosperous port but now the goods don’t sail out on ships, they’re packed in tourist suitcases.

Tan Ky House (101 Nguyen Thai Hoc St.) is one of several privately owned house museums in Hoi An that are prime examples of how these entrepreneurial families lived. Two stories tall, the street front of the house was always for business. The solid walls on either side of the door in the collage above are actually wood panels that can be removed to open the shop. The staircase to the left is to the second floor storeroom. The homes living quarters begin directly behind the shop surrounding two to three courtyards. The first sitting room contains the altar to the ancestors and, in Tan Ky, an elevated altar to Confucius. The detailed and elaborate interior woodwork as well as the 19th century mother-of-pearl inlaid furniture attests to the family’s prosperity. Tan Ky was particularly well situated running the full depth of the street with a direct opening to the waterfront in back.

Hoi An has a number of endowed “family temples,” a common method for wealthy Vietnamese families to broadcast their status and provide for the perpetual and public honoring of their ancestors. Many of these “chapels” are actually large temple/monastery complexes. One of the oldest, largest and most beautiful in Hoi An is the Tran Family Temple still sponsored by the family in its 15th generation.

A “guild system” among Chinese, Japanese and Southeast Asian merchants both regulated and governed trade as well as provided support groups. The Chinese in particular constructed several Assembly Halls which served as Confucian temples, hostels and a social gathering place for these ex-pat sailors. Japanese merchants constructed a Hoi An icon – the Japanese Bridge in the 16th century. More than just a bridge, it contains a small temple dedicated to the protection of sailors. The Assembly Halls are still active temples and social halls.

Although Hoi An was already in decline when the French put the Vietnamese Empire under its “protection,” French merchants and ex-pats found the charms of Hoi An sufficient to create a French Quarter just outside the old medieval town. The graceful tropical colonial architecture and tree lined streets with attractive shops and cafes make is a less hectic stroll than the Old City.

Hoi An is Vietnam, it is a tourist town, the streets are narrow, motor bikes and cyclos are everywhere, selling is in their blood so be prepared for constant pitches every step for everything from ice cream, postcards, chickens, paintings, street foods and, especially, silks – high quality made-to-order clothing and shoes take 1-1/2 days minimum with a reputable store. It’s a cornucopia of colors, smells and sounds. At least once a day for several hours, and during festivals, the cobbled stone streets of the Old City are closed to all motorized traffic. The absence of at least that noise certainly adds to the town’s charm. There is an admission price to most of the merchant houses, assembly halls and museums. A strip of tickets is purchased at one of several tourist offices in the Old City at a price of less that US$1.00 per venue. 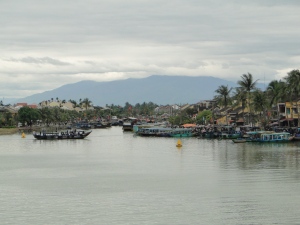 Hoi An is a beautiful and relaxing town, especially surprising given its tourist nature. Within less than one mile are empty pristine white sand beaches. Surrounding the village are emerald green rice fields and vegetable farms. There are additional tourist “villages” for farming, sculpture and fishing but these are virtual recreations of life in the past and generally are excuses for more shopping. The land is flat and ideal for renting bikes. Mountains are in the distance and the fishing fleet actually fishes, it doesn’t just give tourists rides. Quiet hotels and a growing local middle class have spread out onto adjacent islands. Both residents and the town government keep the village clean, something not common in most of Vietnam. If satisfaction can be judged by the large numbers of foreign visitors, Hoi An has patiently, as Confucius advised, turned its silted river into tourist gold. 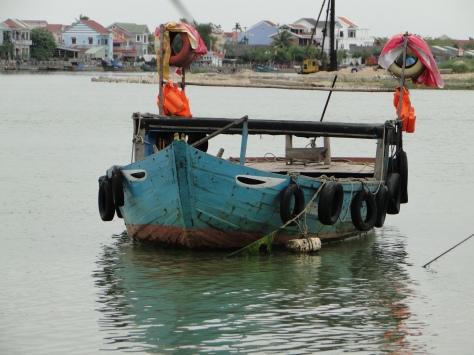 next: Hoi An Part II – festivals, seafood and song