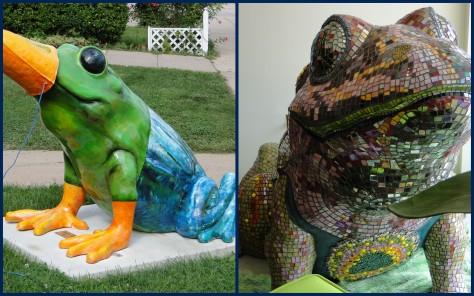 No, the frog has not become the mascot of Reading, Pennsylvania. They are two of four outdoor sculptures from the annual June Arts of the Avenue Festival. They  grace the grounds of the four businesses on Penn Avenue in West Reading that commissioned them for the 2009 festival.

Once a coal choked industrial city in the hills of Berks County, Reading is reinventing itself as a center for arts, education, restaurants and natural food. On the subject of food, it helps that Berks County farms are part of the Pennsylvania Dutch agriculture region famous for their all-natural farming methods.

Founded in the 1740’s, along the Schuylkill River, by two of William Penn’s sons, Reading quickly became an important link for access into Pennsylvania’s interior and a center for the growing iron industry during the Revolution. Reading boomed until the 1930s, when its population reached nearly 120,000. Coal from Pennsylvania’s mountains flowed through Reading like a black river fueling the city and the nation’s industrial might. The city not only was a center for heavy manufacturing but its proximity to New York and Philadelphia retail markets created a vibrant textile and clothing manufacturing sector. The Reading Glove and Mitten Manufacturing Company founded in 1899  changed its name to Vanity Fair in 1911 and is now the major clothing manufacturer VF Corp. In the early 1970s, the original factories were developed to create the VF Outlet Village, the first outlet mall in the United States. The mall is so successful that it draws hundreds of thousands of tourists to Reading every year.

From the 1940s to the 1990s, however, the city saw a sharp downturn in prosperity and population (80,000 in 2008) largely owing to the decline of heavy industry and railroads on whose wealth Reading had been built. Yet even as the city struggled with urban blight and a deteriorating downtown, by the 1990’s a certain stability had been reached. The revitalizing Penn Avenue commercial center – from Mount Penn to tony Wyomissing – played heavily in the December 2007 NBC’s Today show featuring Reading as one of the top four “Up and Coming Neighborhoods” in the United States. 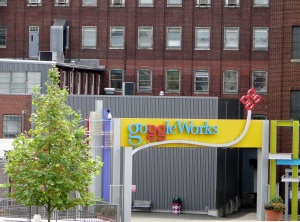 A great example of adaptive reuse is the Goggle Works. Founded in 1871, the Wilson Co. manufactured industrial goggles and glasses until 2002.  The idea of the 145,000 square-foot brick complex  deteriorating just blocks from Penn Avenue stirred strong interest in local leaders. Extensive restoration to the factory resulted in the 2005 opening of the Goggle Works Center for the Arts. Included in the Center are performing arts spaces, galleries, studios and workshops encompassing a wide selection of the arts. 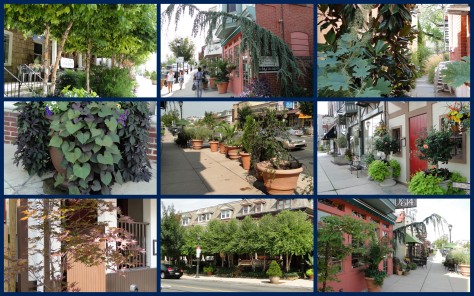 Just across the bridge from the Goggle Works is West Reading where walking along plant bedecked Penn Avenue is a nice shopping stroll past locally owned small shops, restaurants and cafes. I did not see a single national chain store among the lot. The profusion of plants exist, according to the post-office women I stopped to ask, due to the persistance and persuasion of one businessman – the owner of Curious Antiques and Secret Garden, 605 Penn Ave, which is well worth a visit. A branch of the Young Chef’s Academy, 703 Penn Avenue, is in an attractive space. It was filled with eager kids taking cooking classes. The shop carries a line of kid-friendly kitchen tools and uniforms for the budding chef.  Visit the West Reading Main Street site for a list of special events, festivals and shops.

I’ve had numerous reasons to visit Reading over the decades but not for interesting restaurants. The good German stock of Berks County consume high quality meats, vegetables and baked goods from the local farms but there was never much variation in preparation – generous portions of simple hardy food. Yet change has come to Reading and great ingredients are being imaginatively prepared by a new generation of chefs and restaurant owners. Once more, Penn Avenue in West Reading seems to dominate the cafe scene for five blocks from the classic West Reading Diner, 411 Penn Avenue, where you can still get that hardy food, to Go Fishi Seafood Market & Sushi Bar, 622 Penn Avenue.  At Go Fishi you can dine in an attractive front room, or purchase an extensive selection of fresh fish, seafood and salads from the market in back.

Breakfast at Good Eatz Green Cafe, 701 Penn Avenue, is not only imaginative and healthy but good for the environment. 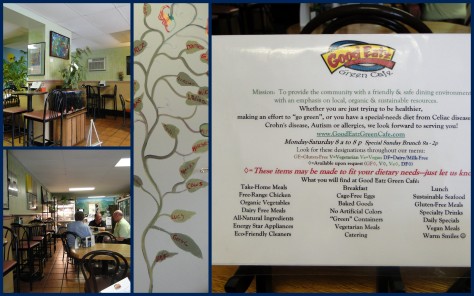 The 30 month-old cafe (almost at the magic 3-year survival mark) serves meticulous, mostly vegetarian/vegan dishes but wisely offer items for carnivorous. Besides being green and natural, an atmosphere of “old town cafe” pervades as a couple of low-key business conversations are carried out over coffee, a few  people at single tables read the paper, backgammon games and books are in a bookshelf and customers walk-in for take-out (natural beverages, prepared sandwiches & salads).

My wife had Green Eggs and Ham, an omelet with prosciutto, tomato, basil pesto and provolone served with three perfect corn cakes – crisp exterior, soft fresh corn interior ($9.00). I enjoyed Eggs Sardou, a variation of Eggs Benedict with spinach and artichoke hearts (no Canadian Bacon) topped with two perfectly poached eggs and real homemade Hollandaise Sauce. They were accompanied by Yukon Gold hash browns ($8.00). The presentations were attractive and the dishes carefully prepared. The Good Eatz Green Cafe is not for customers looking for a quick sitdown breakfast but, as mentioned, talk-out is available.

Even that once venerable bastion of old-school dining, Stokesay Castle, 141 Stokesay Castle Lane, has changed ownership after many decades and entered the world of modern fine dining, sensible portions and artistic presentations. Set in a sprawling 1920’s English stone manor just outside Reading on Mount Penn, the view from the covered bar patio is bucolic and the interior dining space understated, elegant and spacious. The Tuesday and Thursday four-course prix fixe dinner menu is an excellent choice.

Many of the once well crafted urban row-house neighborhoods are in bad need of repair, as in many cities. Yet there is evidence of slow progress in renovating these blighted areas. Very positive is the determination of residents around Penn Avenue, Albright College, Berks County Park (spotless, safe restrooms) and the still beautiful 1920/30’s hill-side neighborhood of Hampden Heights to maintain the original architecture and landscape. 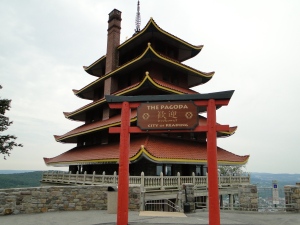 Driving into Reading, especially at night, a visitor can’t miss a large, brightly lite red Japanese Pagoda looming over the city 900 feet up Mount Penn. Built in 1908 by a Reading quarry millionaire, plans to open it as a hotel/club/restaurant quickly fell through. It was purchased in 1910 by another Reading millionaire who promptly gave it to the city. Like all “white elephants” it’s useless and beloved. Having gone through a number of restorations over the years, the Pagoda is in beautiful condition, and the city has recently constructed nature walks in that area of Mount Penn. It seems only open on the weekends, contains a small gallery and an oriental themed cafe. There is talk that perhaps the city will restore the Pagoda to its original purpose as a hotel and fine-dining restaurant. Perhaps it will reinvent itself yet again.  In which case, the Pagoda is a fitting mascot for the city it oversees.

Today, February 16, is #nationalalmondday, and I love almonds. So do Greeks and I was thinking of #corfu enjoying #venetian inspired #candiedalmonds and #nougat at Lazarus Distillery & Artisan Sweets (photo #4 is a kitchen band saw being used to cut nougat) #culinarytravel #greekfood #greekcandy #almonds
All the hearts you desire on the @visitpuertovallarta #malecon this #valentines day.
Happy #valentines day from @visitpuertovallarta
Happy #valentines day from @visitpuertovallarta #publicart #localartists #mexicanartists
Bachelor apartment #stilllife. #singleliving @puertovallartamexico #foodiefriday
One reason I love living in @visitpuertovallarta #sunsetphotography #bahiadebanderas #mexicantravel
Morning #sunlight on #bougainvillea @visitpuertovallarta. #mondaymorning #streetscape #urbanphotography #tropicalwinter
A “shadow of my former self” selﬁe ... #sundayvibes #sundayselfie
Frida Kahlo was an eclectic artist & designed many of her clothes based on her imagination, Traditional Mexican designs & the requirements of her disabilities. A collection is included in the #museum at her life long home Casa Azul in @mexicocityofficial @museofridakahlo #fashiondesign #mexicanartist #fridakahlo #mexicantravel #traveltuesday
Greek #orthodoxchurch #epiphany (Three Kings Day) tradition of young men diving in cold January 6 water to retrieve a cross - symbolizing baptism & the new year. This was at the 2016 celebration in Tarpon Springs, Florida - the largest Greek community in the USA. #greekheritage #tarponspringsflorida #culturaltravel #greekorthodoxchurch #greekfestival #usatravel #floridatravel
It’s such a beautiful winter day in @visitpuertovallarta even the #parasailing #beachtoys are happy. #mexicantravel #pacificocean
January 4th is National Spaghetti Day 🍝. So here’s a Spaghetti Frutti di Mare I had in 2019 while in #heraklion_crete #culinarytravel @spaghettidaycomics #cretefood #aegeanseafood #greekpasta
Mexico City #skyline from the @bosque.de.chapultepec #mexicantravel #urbanscape #cityparks #travelguide @mexicocityofficial
Salad or garden? #foodiefriday
New Years 2020 from @visitpuertovallarta #mexicotravel #bahiadebanderas
Happy first day of 2020.
In 2 lines of #poet Mary Oliver’s The Swan she pose an eternal question... “And did you feel it, in your heart, how it pertained to everything? And have you too figured out what beauty is for?” I don’t make #newyearsresolutions. I’m usually intrigued by a photo I’ve taken in the “old year.” The photo triggers one of those eternal possibilities (an answer to happiness). I was on a foot paddle Swan boat for the 1st time in what remains of the ancient lake that once was the center of #tenochtitlan. It’s now a small curated pond within The Bosque de Chapultepec in @mexicocityofficial Yet I experienced a surprising serenity while remembering Mary Oliver’s poem The Swan. Happy New Year friends. @chapultepeccdmx #traveltuesday #newyears2020
Inside 1 room of Chapultepec Castle (1785) painted with 19th century murals. The castle served many official capacities from royal palace to current day’s National History Museum. @chapultepeccdmx #mexicanheritage #culturaltravel #historicsites #mexicantravel
Boysenberry ice cream is so easy & quick to make with a @cuisinart #icecream maker. #affordabletools #effortless #homemade #fruit #berriesandcream #berries #freshingredients #culinaryarts #funtoeat
Aveneda Constituyentes planted with #poinsettia for the season as it runs along @bosque.de.chapultepec @mexicocity.explore #mexicantravel