Italy is indisputably a preeminent center for design be it clothing, jewelry or kitchen tools. The Philadelphia Museum of Art’s current exhibition: Alessi: Ethical and Radical, is a virtual catalogue of Alessi kitchen design over the past 75 years.  It’s quite literally the catalogue if you browse both the exhibit and their website. Currently operated by the third generation, the family owned Alessi Design Factory is a major supplier of restaurant small ware, home kitchen tools, home and office decor, but it’s the designs and the company’s philosophy that the exhibit in the Perelman Building is celebrating.

From the simplest restaurant coffee pot to partnerships with some of the world’s foremost designers, artists and architects, Alessi has consistently striven to explore the boundaries of form while not compromising function or quality. Although the titanium tea and coffee set could be mistaken for a sculpture, it is a functioning service. 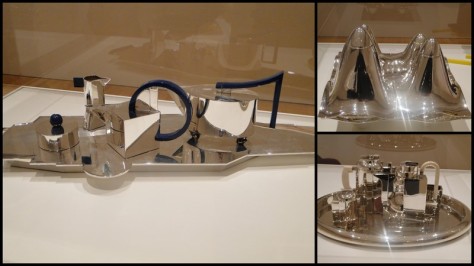 The whimsical and the practical are both well within Alessi’s vision. The simple Brazilian designed wire baskets with leather binding and the amusing coffee pot show off this side of the line. 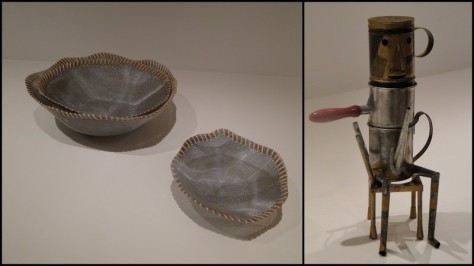 Since the Industrial Revolution in the mid-1800’s, South Philly –  the area bounded by South Street to the north, the Delaware river to the east, the Schuylkill River to the south and Broad Street to the west –  has been Philadelphia’s own Little Italy. It’s a compact, densely populated area of neatly maintained row houses, small shops, churches and Union halls. Cars tend to park where ever it’s legal, which seems to be places I’d never suspect. Although much of the heavy industry that first attracted immigrants to the city has vanished, South Philly is still a center for food markets – the famous Italian Market – fabrics and Italian restaurants.

Paradiso Restaurant & Wine Bar at 1627 East Passyunk Avenue, near Tasker Street, is in the heart of South Philly. I was not familiar with the restaurant, but we wanted to eat in the middle of the neighborhood, and we were not disappointed. Early on a Sunday evening, having a table without a reservation seemed fine, but counting the number of regulars, I’d recommend reservations any other night. At less than ten-years old, Paradiso is not a South Philly institution allowing it the freedom to combine tradition with innovation.  Chef/owner Lynn Marie Rinaldi’s Rice Pudding ($8.50) with dried sour cherries, cinnamon and vanilla beans,  is an award-winning (Philadelphia Magazine 2005) perennial favorite, and if I can believe our server (her brother) the Braised Tripe with Fresh Tomato and Parmigiano Reggiano ($8.50) was their South Philly grandmother’s recipe.

The Seared Skate accompanied by Fregola Sarda with lump crabmeat ($22.00), is not a South Philly regular – or even a Philadelphia regular – menu item. Skate is the tender wing of this ray fish and enjoying its natural butter-softness with Paradiso’s well seasoned searing was a rare delight. Fregola Sarda is Italian couscous  made by a time-consuming process of rubbing tiny grains of semolina together with a bit of water and toasting them, repeating until you end up with tiny toasted pasta balls that are the size of Israeli couscous – not the tiny Moroccan. Paradiso made it an opulent side dish with the addition of crabmeat.  We had not seen Fettuccine with Wild Boar Ragu ($17.00) on a menu since a trip to Siena several years ago. This rich, earthy pasta dish is perfect for winter time, and Paradiso gilded the recipe by adding ground chestnuts to the pasta dough. Paradiso has an extensive wine list,  yet on Sunday patrons may BYOB.

South Philly celebrates Christmas with exuberance. Entire blocks compete for decorating honors and the bakeries overflow with Italian treats. It’s not too early to order your pig, that whole pig, at Cannuli’s in the Italian Market.

2 thoughts on “Philadelphia: Tea and Tripe”