“Simplicity of life…is not a misery, but the very foundation of refinement; a sanded floor and whitewashed walls and the garden trees, and flowery meads, and living waters outside.”

At the apex of Victorian excess in both architecture and interior design, a quiet revolution was brewing among British and American artists. Reacting to dehumanizing industrial life in the late 19th century, a back to nature and handmade crafts movement was born. Architecture opened up interior space and utilized hand worked wood, chiseled stone, brass, copper and glass to mimic the forms of nature. Many architectural styles became common place in America between 1900 – 1945: Craftsman bungalow, Ranch house, the Prairie School and Mission Revival. Even landscape design was affected moving away from formal gardens to recreating the country side or a rural village within an urban setting (Frederick Law Olmstead’s New York Central Park).

By the late 1800’s, Lansdale, Pennsylvania, was connected to Philadelphia by rail making both a commute and shipping profitable. Like many Montgomery County towns along the line, Lansdale prospered. The brick and wooden row houses, sturdy Four Square brick homes of the middle class and the stone mansions of business families are all laid out in the predictable grid pattern of most American towns.

In 1912, Harry Richardson, son of a prominent Lansdale businessman, purchased land on the west edge of town and laid out 36 lots for what was to be an Arts and Crafts Movement village, Oak Park. Entering through the gate with its two classic early 1900’s tile mosaics, the narrow winding streets curve around irregular lots covered with trees and plant life. Oak Park was not meant to be a “cookie cutter” development so no two houses are alike. Many were designed by local architects and built over a 30 year period, several of the earliest were designed and built by Harry Richardson. Nearly all are modest in size which was a tenant of the Craftsman Movement. Unfortunately, unlike Wyncote Historic District, there does not seem to have been, or is, an owners association – which is logical given the free-thinking of the Arts and Crafts Movement. Yet this has resulted in houses not remaining true to their original designs and, in some cases, very poor maintenance.

Two of the earliest homes in Oak Park, Richardson’s 1912 bungalow and William Heebner’s 1915 bungalow typify the ideal that Oak Park was to represent – modest dwellings amidst gardens and trees in a country village enjoyed by well-to-do families. Unfortunately these two historic bungalows are in need of major maintenance.

In pristine condition is the 1915 Dutch Colonial Revival that architect Walter Slifer built for his mother. Slifer took advantage of the abundance of local stone as well as the classic Craftsman’s use of wood shingles. Next door is a stunning Prairie School style house  designed by, unfortunately, an unknown architect. The Prairie style was perfected by Frank Lloyd Wright who in 1915 was at the peak of his success having designed many famous homes in that other Oak Park (Chicago suburb). This Oak Park house (picture below) is a classic Prairie style with its clean horizontal lines and understated decoration meant to compliment the clean lines of nature.

Harry Richardson wanted Oak Park to be a community of Craftsman bungalows and he basically succeeded with about one-third of the three dozen houses maintaining their structural and design integrity. The 1998 listing of Oak Park on the National Register of Historical Places will, hopefully, help preserve its architectural heritage.

Like many towns in the post-industrial Northeast, Lansdale went through a long period of economic decline which certainly discourages home maintenance. Fortunately, this decline began a reversal in the 1990’s and the town today sports many restored homes and commercial buildings covering the entire architectural history of Montgomery County since Colonial days. 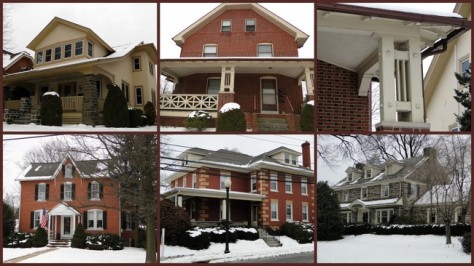 Going to the ends of the Earth is fun, but I am rediscovering adventure in my own back yard.