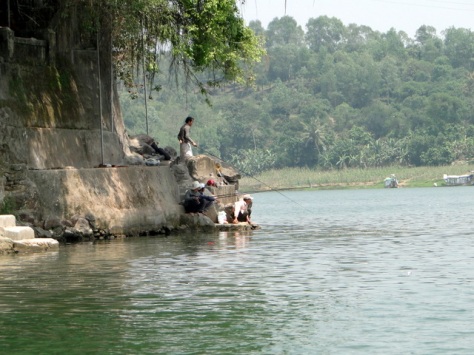 If it wasn’t for the palm trees I could imagine Huck Finn fishing the Mississippi on a lazy summer day, but this is a hazy March day on the Perfume River. Like Huck, the fishing isn’t just for fun, it’s dinner.

Like so many rivers that nourish lands holding ancient cultures, the Perfume River is the artery of central Vietnam and Hue. Twisting hundreds of miles from northern mountains, she spreads wide over the low plains before joining the Pacific just east of the city. In fickle March when morning fog turns into muggy afternoon, with or without chilly showers in between, the land is as emerald green as Ireland. Lush riverside farm gardens are worked by dozens of men and women with hand tools. The plots are postcard perfect and serious work for these farmers.

Every late summer and autumn, like all alluvial rivers, The Perfume floods for as far as your eye can determine a tree line or the second floor of sturdy buildings. Bamboo structures visible now near the fields are seasonal and will be gone in the floods. Therefore house boats are common for many who cannot afford housing on land at a safe distance from the river.

The practical resilience of river life is fascinating. Why not use it for both the wash and rinse cycles –  especially when the boat’s in motion and tourists are up front.

The grittier side of commercial life on the Perfume is sand extraction. With endangered reserves of hard woods forcing Southeast Asian nations to restrict the forest industry, demand for concrete is high in this rapidly developing region. Since these rivers silt-up frequently they have been a convenient source of sand, but now demand is outstripping supply. Over dredging of the Perfume, due to the alluvial nature of the river, is a cause of worse than average floods within the past decade. These dredging operations are usually family run with simple power pumps to suck and filters to capture the dark gray sand from the river bottom – frequently mounted in their house boats. All day up and down the river are dozens of family operated sand ships. At the end of the day the owners sell their sand for a pittance to a central collector.

Called garden houses for their proliferation of individual fruit, flowering trees and plants on their 5 + acre plots, these affluent houses were the ultimate of upper middle class life. An Hien started as the home of an Imperial Princess (of a minor wife) over 135 years ago, passing to a high Court Mandarin and to the present generation of that family. It’s not only remarkable that the antique all exotic wood house with priceless family heirlooms survived wars but the Perfume River’s floods. Although set several hundred feet from the river bank, we were shown the 4 to 6 foot water levels of the last decade of floods! The traditional tile roofed 3-bay house, supported by intricately carved ironwood pillers and beams, contained the ancestrial altar and living quarters of the family, sans the kitchen, etc. Open to the lily pond through carved screen doors, these havens of peace for their busy professional owners were based on strict Confucuan design to maximize harmony and tranquility.

The gardens were prized for both their breadth of plant varieties and significance to agriculture and cooking. Jasmine, cinnamon, pomegranate, sunflowers, climbing and wild indigenous roses, exotic species of orchids, fruit trees characteristic of all of Vietnam’s regions: lychees, persimmon and pears from the north, mangosteen and durian from the south with pomelo, jackfruit and oranges plus almonds and the list goes on.

Is there an army of professional gardeners? No, simply the extended family members and in this case they range from California to London. Opening the house to visitors is purely voluntary and none of the Garden House owners receive compensation other than donations. In An Hien’s case the only “commercial” pitch were plant cuttings for sale. If I could only have brought some back to the States…