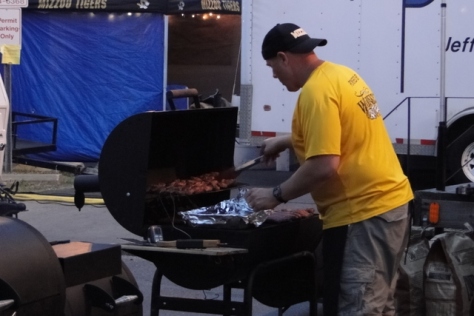 It was a beautiful Friday evening with a full moon illuminating 60 barbecue team sites containing mobile kitchens, smoking cookers, music blaring and people in a party mood before Saturday’s serious business at the Roots, Blues and BBQ Festival competition. At the invitation of the Columbia, Missouri, Convention and Visitors Bureau, I had exclusive access to interview four of the contestants and discover what makes this smoke filled event so exciting.

Jay Curry heads the team of Spicewine Ironworks and the metallurgical term is no conceit. Already in the metal fabrication business, Jay started designing and making a better smoker seven years ago. He didn’t intend to create a line of cookers but word got around and success led to the creation of Spicewine Ironworks. “Probably ten or twelve of my cookers are out here,” at the Festival competition, “I don’t mind getting beat by one of my cookers,” Jay beams with both pride and modesty.

“Best thing is our cookers are insulated,” he explains, “they’ll cook just as well at -5°F or at 98°F. From a competition standpoint, the temperature stays even for four hours…” on one load of wood or charcoal. “We use apple wood for chicken and ribs, cherry wood for pork and brisket. You can really over smoke on hickory wood. We’re strictly fruit wood.”

Jay didn’t stop at cookers. Over the years he has created recipes for barbecue sauces, rubs and seasonings and currently markets a dozen products. “One of our BBQ sauces (Blue Collar BBQ) took Best In the World at American Royal in 2009, and one of our rubs (Heffer Dust) took Best in the World in 2007.” That’s no mean feat considering that Kansas City’s annual American Royal is dubbed the World Series of BBQ with over 500 contestants.

“When doing a sauce I don’t make them with competition in mind. To sell it it has to please most of the people. In this area of central Missouri that means usually a sweet, tomato based sauce while in the Carolinas it has to be vinegar or mustard based.”

Soy Sauce Brine on the Chicken

Inside the gleaming stainless steel kitchen trailer, another of Spicewine Ironworks designs, I notice boneless chicken thighs sitting in a dark brine solution. Wondering if the color was brown sugar, I was told, “No, a little soy sauce and then we apply the spice mix after brining.”

As the music plays on the built-in Bose stereo system, they all seem happy with anticipation. And why not, having taken Grand Champion in May at the Columbia Elks Lodge #594’s competition, Spicewine Ironworks won a coveted spot at the American Royal’s 2011 Invitational limited to 150 Grand Champion winners.

At first I almost overlooked the Smokin’ BarbEGGque team seeing as they were set off from the general staging area across from the judging tent, but a series of maple wood tables holding bright green orbs caught my attention. It’s the only team exclusively using the Big Green Egg, the unique ceramic cooker that’s becoming a high end fixture in many backyards.

“The greatest thing we like about the Egg is that a lot of guys have to add water pans to keep the moisture. What we like is that the Egg’s designed to keep in the moisture,” explains team leader Trevor Bulgin. For Trevor, along with his wife Denise and partners Mark Schlemper and Trevor Fowler, this Festival represents something special other than simply the use of this unique cooker. This is Smokin’ BarbEGGque’s debut competition.

Having used the cooker in their own Rocheport, Missouri, backyard, they were encouraged by Columbia’s local Big Green Egg distributor to consider competing. Nothing like jumping into the State Championship for your first experience.

Denise explained that they use the Big Green Egg’s own charcoal plus some hickory and apple wood for their smoking. They don’t brine their chicken and they “doctor” commercial sauces and rubs. She had just removed a dessert pizza from one of the cookers that she was testing for tomorrow’s optional desert category. It tasted fine with cream cheese, strawberries, pineapple and chocolate.

Like at other sites on this competition eve, the team seemed relaxed while they concentrated on preparations. Mark was carefully trimming the thick layers of fat off a brisket while Trevor Fowler spread yellow mustard on another followed by a dusting of spices. Having already been told that mustard on brisket was more deep south than Missouri, I wondered to myself if that was a wise choice.

Randy Hinck of Plowboys BBQ is no neophyte having won Reserve Grand Champion at the Roots, Blues and BBQ’s 2010 competition. A hog farmer by profession, he has a different take on both cookers and fuel. Randy’s cooker was the largest I’d seen, nearly a furnace, and it burned natural wood pellets. The pellets are fed into the cooker, an electric hot rod starts the burning and then a fan keeps things smoking. “With pellets the higher the temperature the less smoke,” Randy told me, “I’ll cook for four to six hours at 180° to generate smoke. Once I have the smoke set on the meat I turn it up to 225° for several hours. Then I’ll wrap it and raise the temperature to 250° until I have it done.”

He explains that what the judges want to see “first and foremost is the meat cooked properly…and that’s one of the reasons I cook with wood pellets. 100% natural oak and hickory….I can pretty much set and forget it.”

Despite the spacious kitchen trailer, which includes sleeping space, Randy’s Plowboys BBQ team tonight consists of only he and his son, an agricultural student at the University of Missouri. “He’s the official taster,” says Randy. “Guys at work always give him a hard time, “You’re always criticizing your Dad’s food how come you don’t cook?” “Well it’s all good,” his son replies, “It’s my job to pick out what’s great.” I’d say that makes for a good team.

As I entered Jayme Johnson’s cooking site, a mahogany colored 600+ pound whole roasted pig complete with an apple in his mouth and flowers over his eyes stared placidly at me. As Millie Rambis, the BBQ Competition Coordinator explained, “It’s a good BBQ party on Friday night.” Jamie had spent 16 hours slowly roasting this magnificent specimen for his friends to enjoy, and man it was tasty.

“I’ve tried lots of woods, but I like pecan wood for smoking,” was Jayme’s take on the many sources of fuel, “I get it from a local farmer in exchange for several slabs of meat.”
He’s been competing for twelve years, but “I’m a pipe fitter by trade.” Before creating the team “I competed by myself for over eight years, but it’s pretty overwhelming.”

It seems that most of the teams members have day jobs, make the extensive barbecue competition circuit throughout the region and cater events. Jayme’s “doing a whole hog for a wedding rehearsal dinner in three weeks.”

Like all the contestants I spoke with, Jayme creates his own variations of available sauces and rubs, but it was his entry into the optional dessert category that was intriguing. “I’m going to do a butterscotch raspberry creme brulee for the dessert competition with a little dark chocolate on top. It’s a lot of fun.”

And the winner is….

Jay Curry’s Spicewine Inronworks took First Place in Chicken with a perfect score – the soy sauce brine worked. Remember our BBQ competition virgins, Smokin’ BarbEGGque and their mustard slathered brisket? On their very first try, they placed Fourth in Brisket out of 60 competitors. Believe me, when I stopped by their site the next day they proudly displayed their ribbon, and they agreed with Jayme Johnson, “It’s a lot of fun!” 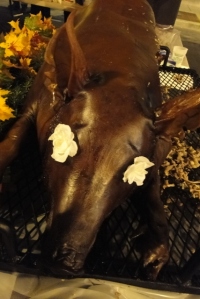 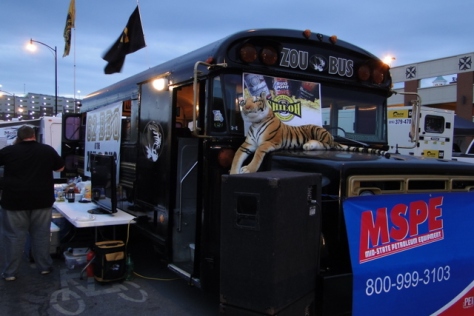