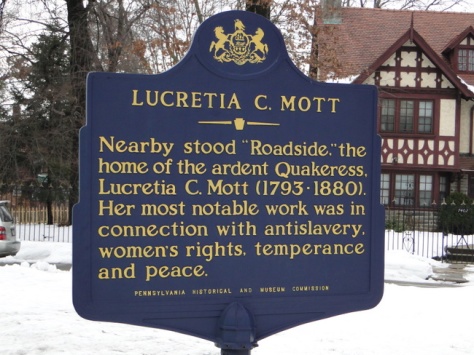 Philadelphia and its surrounding counties – Bucks, Montgomery, Chester and Delaware – were all part of the original land grant of Pennsylvania that William Penn received from King James II in the late 1600’s. Having alienated his famous father, Admiral Penn, by associating with that “radical religious cult,” the Society of Friends (Quakers), William took his inheritance to establish a utopia of free speech and social equality in the New World.

I grew up in historic Bucks County in the 1950/60’s when it had a population of 250,000  (over one-million in 2011) and there was so much open farmland I was always bored on a “dog-day” July afternoon because the world was so silent. It was a racially segregated society. There were some African-American families living in the county. Many worked on the large prosperous farms. My parents occasionally employed a local African-American resident (his family still lives in the area) to help around our 14-acres of (non-farm) land. He always had lunch with us, and he was always addressed as “Mr. …” – which was how we were taught to address adults. My parents were liberal Catholics. I was 11 years old when I lost my innocence concerning racial prejudice. An African-American farm-worker family enrolled their boys in our local Catholic school – the outcome was not pretty. I was shocked, horrified and puzzled at the racist reaction of my friends and their parents. The boys didn’t last long. It was the beginning, for me, of life-long realities. 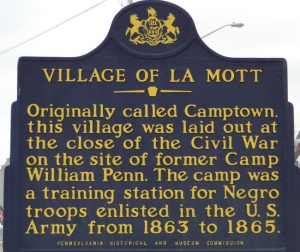 In the 1860’s, Cheltenham Township, Montgomery County, consisted of large Quaker-owned farms. It became a favorite location for wealthy Colonial Philadelphians to establish country farm/estates. By the Civil War, 1860-1865, the area had attracted both the interest of wealthy investors and the Federal Army. Camp William Penn was created as the first, and only, Civil War training camp for Black soldiers. The site was deliberately chosen because, being within a Quaker community, there was less racial intolerance than within the city itself.

Lucretia Coffin Mott, born into a prominent New England Quaker family, settled in Philadelphia with her husband in the 1820’s and, with both their strong anti-slavery views, created one of the first anti-slavery societies in the country – as well as being a leader in women’s rights (Seneca Falls) and many other social issues. Her son-in-law, Edward M. Davis, was a wealthy Quaker who had a vast farm/estate in Cheltenham Township which she and her husband often retreated to when their home on 3rd. & Arch in the city became too frenetic. After the Civil War, Cheltenham became the focus of intense real estate development among wealthy Philadelphians – many non-Quakers: P.A.B. Widener,  William Luken Elkins, John Wanamaker. With Quaker influence, a unique development formed.

As these wealthy families built their own vast estates and developed such exclusive communities as Wyncote, Glenside and Elkins Park, the influence of the Davis and Mott families encouraged these non-Quaker millionaires to act with a social conscience. Davis and Mott set aside land from their estate for African-American families – many were workers on neighboring estates – to rent and own their own dwellings. In the 1890’s one of the first home owners was the butler to Mr. William Elkins. Architecturally, there is nothing interesting about La Mott. The houses are classic working class bungalows, row houses and twins that are found in all Northeast coast cities. Yet it’s the reality that such a neighborhood existed at all with the opportunity of home ownership in the late 19th and early 20th centuries that is remarkable.

Of course, African-American’s were still segregated, and employers were the wealthy white residents of the Township. Right next door to La Mott, separated by an enclosed iron gate, is the still exclusive Latham Park in Elkins Park. This mile-long private boulevard is lined with spectacular examples of upper-class architecture of the early 1900’s, including a stunning mid-century modern (1972) currently on the market for $625,000.

Even given the obvious racial/class differentiation of the past – although today more than one Black family owns a Latham Park house –  La Mott Historic District represents a seminal social shift in American racial attitudes and is a prized symbol among Philadelphia’s Black community.