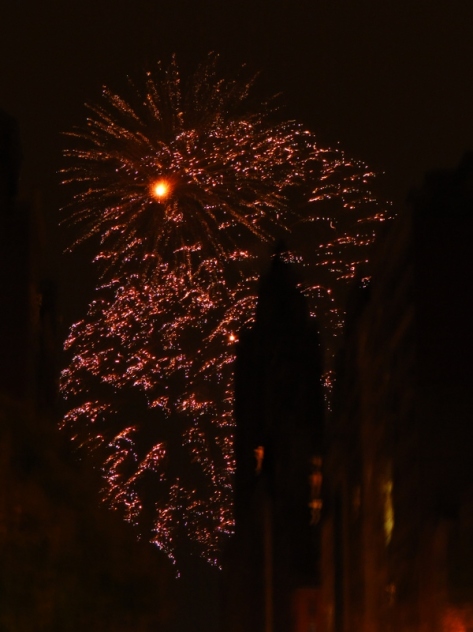 The unexpected fireworks were free, in celebration of the 2010 New York Marathon that would be run the following day. We had just stepped out of Pasha Restaurant on West 71st Street, when the booming commenced. It was an unexpected end to a pleasant Turkish dinner, one of the great cuisines. The interior of Pasha is comfortable with soft lighting and well modulated background music. From 5:00 to 7:00 PM the $23.95, 3-course, prix fixe menu is well thought out attracting repeat customers with five choices from the main menu (not the boredom of so many prix fixe selections.) My wife had the prix fixe with a salad, Piya (Cannellini beans tossed with sweet onions, scallions, parsley, tomatoes, and extra virgin olive oil) with warm flaky rolls to absorb the herbs. Alabalik Tava followed (Boneless brook trout dusted with cornmeal and pan seared). Dessert was a wedge of perfect baklava – (non-syrupy) –  spice, nut and honey infused pyhllo pastry. For $24.95, I had the fish entrée of the day: a whole, wood-grilled Chilean Sea Bass.  Its moist white meat was encased by its crispy, herbed skin. Side dishes were crisp, steamed vegetables and an herb-infused rice pilaf. It was not wise to arrive on a Saturday night without a reservation – even if it was only 5:30 PM. Yet Pasha was gracious and had a table that was not booked until 7:30 PM, but I would recommend reservations since the dinning room was full by 6:30.

At West 78th’s  Drilling Company Theater, we attended a moving and jarring new play, superbly acted and produced by this award-winning 11-year old company. Eric Sanders’ Reservoir is a heart wrenching look at the psychological detritus of war – the “survivors”. At $18/ticket, the Drilling Company proves that top theater is found everywhere in New York before it moves on to $200/ticket on Broadway. Saturday evening’s dinner, theater (and fireworks) cost less than $130/couple.

Actually, Lederhosen Bierhaus is not nearly as kitsch as their home web site suggests. On Grove Street, off Christopher Street in the trendy East Village, Lederhosen has the atmosphere of a neighborhood bierhaus. In my two visits, over a six month period, I’ve yet to see any staff wear either lederhosen or  rhinestone decorated milk-maid dresses. Of course, I’ve yet to order the decidedly college-fraternity sized boot of beer. In smaller, more manageable quantities, their superb selections on-tap, and in bottles, set the stage for equally authentic Bavarian bierhaus food. Main courses ranged from the classic Schnitzel to sautéed herring fillets with mushroom sauce (I had that).  Each generous portion comes with a variety of sides, minimum four  – green and red cabbage slaw, potato salads, sautéed potatoes, bean salads, spatzzle. (average entrée $10 – 19)  Soft, aromatic, in-house pretzels are served with german mustards ($3.00)  along with a variety of wurst on crispy rolls with toppings ($5.00), appetizers for pickle and herring lovers ($5.00) and generous soups and sandwiches ($5.00- $10.00) round out a menu to be enjoyed in a convivial atmosphere that’s hard to top – unless you just really don’t like German food, but then…you can always try their flights of beer (8, I believe) with shots of schnapps. 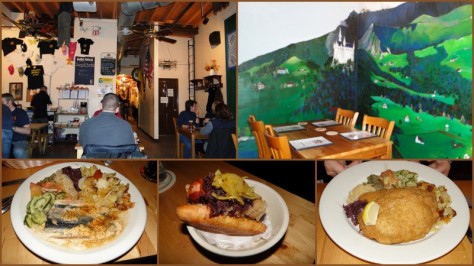 On our first visit to Lederhosen we were with an Austrian friend who was impressed with the quality of this everyday German pub faire. In the picture above the three dishes are from left: Boneless Herring Fillets with a choice of sauces ($10), Currywurst grilled beef sausage ($5.00) and  Wiener Schnitzel ($17) Ah yes, those are lederhosen hanging from the ceiling (top left). The restaurant has three small rooms that fill quickly for lunch and dinner. Reservations are not accepted except for special occasions, but waiting times are typically not long, and you can always have a beer while you stand in the social bar entrance area.

Marie’s Crisis Cafe, 59 Grove Street, is oddly unique in bridging a number of Lower Manhattan social stages. The below street level bar is dark as should be expected when in an 18th century building  – once home to Tom Paine, where he penned his famous revolutionary essays The Crisis Papers.  It went down-hill after that going from bar/brothel to worse until Prohibition (by the 1920’s it was known as Marie’s). After Prohibition’s 1930’s end, Marie’s somehow qualified for a stunning WPA funded reverse painted glass wall mural depicting both the French and American Revolutions, launching a new era.

On Grove Street just off Christopher and 7th Ave, (and only 4 or 5 blocks from the Lederhosen) this area of the Village was always known for being largely gay, hip and culturally cutting edge. For over 35 years the latest reincarnation of Marie’s Crises Cafe has witnessed the neighborhood’s transformation from grunge to designer chic. Yet Marie’s Crises Cafe has remained a relaxing, straight-friendly,  singing piano bar and neighborhood hangout. My wife, friends and I have spent several evenings enjoying the ongoing concert with professional theater pianist playing at the separate piano bar. The pianists of the evening have terrific voices and encyclopedic musical theater repertoire, but its the participation of patrons that take Marie’s to a different level. We’re not talking karaoke here. Regular patrons at Marie’s are often the seasoned professional as well as the young aspiring male or female stage singers.  There is more standing room than sitting room and the bar is basic but inexpensive ($6 – $7/beer and $8 – $10/shots and drinks). Yet there’s no cover for this top-notch entertainment.

Between Lederhosen Bierhaus and Marie’s Crisis piano bar, a Friday evening in Manhattan’s Village for two, with dinner, entertainment and drinks cost us  less than $100.00

We were staying with a friend on Staten Island, a pleasant, free, 20 minute ferry ride that passes  Governor’s Island, the Statue of Liberty and Ellis Island, but it’s viewing Manhattan at night that’s magical. Staten Island’s an article in itself, but one restaurant stands out, amidst a sea of mediocrity.

We had Sunday dinner at Bayou Restaurant, 1072 Bay Street, in the middle of a nondescript commercial strip. Yet there’s nothing nondescript about the execution of its Louisiana inspired menu. My wife, a New Orleans native was impressed with the Cajun Seafood stew, our friend’s Seafood bake and my rack of lamb –  all with Cajun spices and Louisiana’s French/Spanish inspired sauces. Dinner per person, with wine and tip, for 3 was $136.00 ($46/per person). Everything else we did that day of the Marathon was free(no, we didn’t run…now if it was a hike…).

True, we spent the weekend at a friend’s apartment, but before the invitation, I had planned to use some rewards points for two-nights at a first class Manhattan hotel that, without points, would have cost $600 for the weekend. Responsible use of travel reward  credit cards can result in significant savings on future trips.

For a bit over $350/couple we had dinner and entertainment for three weekend days, two nights, plus subway fares on the city’s efficient, renovated system. Manhattan on a budget? Actually, no – Manhattan on the smarts. With a little reading/skimming – New York Times  (paper or on-line), New Yorker magazine and blogs – it’s easy to create a list of favorites.

There’s nothing like New York…at least to visit for a weekend.