“Past error is no excuse for its own perpetuation.”  Senator Robert F. Kennedy, 1968 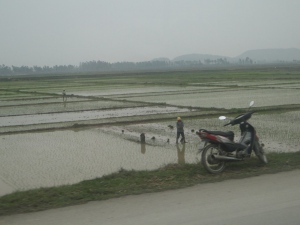 There’s little visible evidence of Hanoi circa 1010 – the city was established by Chinese expanding southward on settlements along the Red River that had been there already for 2,000 years. Actually, there’s little evidence of Hanoi pre 1870’s. Confucian culture preserves the spirits of the ancestors, not their buildings. Even if decades of war and millions of tons of dropped bombs had not significantly damaged the city, ingrained capitalism would have dictated their presence superfluous. The drive from Hanoi’s dreary Noi Bai International Airport – 28 miles (45 km) from the city’s downtown – passes extensive rice paddies boardering high-rise office complexes, narrow mold-streaked French colonial-style town houses next to another BMW dealership before winding snake-like into the heart of Old Hanoi with it’s 21st century sensory overload.

“Charming” is a term to apply to Hanoi only if you believe Manhattan deserves the moniker as well. Frenetic is my description. The motor bike horns begin by 4:00 AM, followed by the publically broadcast music from the computer/TV store across the street starting at 8:00 AM, then the TV in the hotel’s breakfast room entertaining the owner’s young son with the Cartoon Network dubbed in Vietnamese. Outside is pandemonium if not prepared. 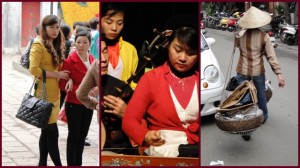 Hanoi is a city that would make Donald Trump proud. Everyone is an entrepreneur and quite aggressive in their selling methods whether it be a cyclo driver following you down the street because you really don’t want to walk (?), or stepping over and around another sidewalk café while saying “no” to the hundredth deep fried donut, peeling the hand of the seller off your arm because you really do not need another map of the city all the while being aware that you’re walking in the middle of the street, because there’s no sidewalk space, along with cars, motorbikes and bicycles. Everything is for sale and streets, not just in the Old City, are frequently dedicated to a product – silversmith, watches… The Hotel Ho Guom was located on the edge of the Old City and the French Quarter and most of the surrounding shops were computer and TV stores. 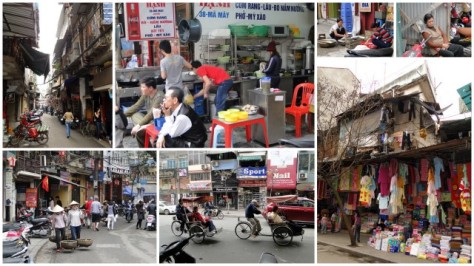 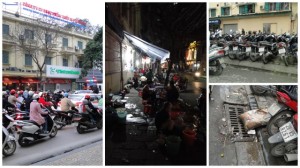 Street life is not attractive compared to Thailand and Laos. The city is dirty. In Thailand and Laos both the cities and countryside were virtually trash free and yet there was not an overabundance of trash cans. Residents and shop owners simply picked up after themselves. Not so in Hanoi. There is an air of freewheeling rampant capitalism with a “me-me” attitude. It is nearly impossible to simply stop on the side of the street when walking to take a photo without having to dodge a vehicle, a person, a pile of discarded greasy food or a hawker. Yet Hanoi is a rich city. It is Southeast Asia’s most expensive real estate, everyone is either working or eating (or both), Bentley, BMW and Mercedes cars share the streets with motor bikes, high rise buildings are going up and the lakes are beautiful – even if they’re still not havens of quiet.

It is not a tourist city, it’s for business. Evidence of the horrific wars that tore the country apart are nowhere to be seen except in the museums – none of which are worth seeing unless you’re really into war and politics. The most prominent statue to a political figure is the huge monument to Emperor Lý Thái Tổ (974-1028) who ended Chinese domination over Vietnam. One of the city’s largest structures is the Roman Catholic Cathedral of St. Joseph (1886). Over 15% of Vietnamese are Catholic and Saturday night Mass was packed. 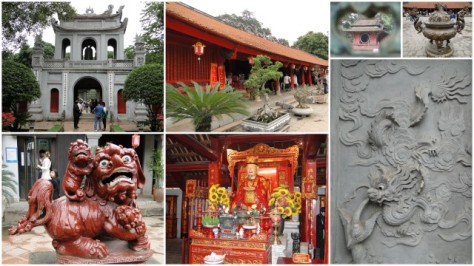 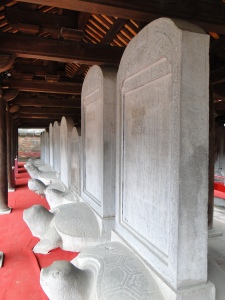 The Temple of Learning, built in 1070, dedicated to Confucius, functioned for more than 700 years as Vietnam’s Imperial University educating the country’s nobles, royalty, mandarins and other elite. If after years of study and a month-long series of exams, a student graduated as a Mandarin their name was engraved on stone stele that sits on large stone turtles in the temple. Annually about 8 out of every 3,000 exam takers ever reached that loftiest of degrees. The temple consists of a series of five landscaped courtyards. The first two are primarily gardens including fanciful designs and topiary. The third one has a lotus pond and the stellae. The final courtyard holds the shrine to Confucius. The northern half of Vietnam has been Confucian for centuries. More a social and political philosophy based on ethics and behavior, and quite compatible with capitalism and central government, Confucian thought – although complex – does guide Vietnam today. Ancestor worship and offerings to the animistic spirits of nature by burning incense and leaving food and drink on alters, in trees and at monuments is as common in Vietnam as anywhere else in Southeast Asia.

Within the Old City are several privately owned houses many within the same family dating back several centuries and are open to the public. They give a glimpse of middle class merchant life that, in reality, still exists today. The front of the house was always the store, and directly above were the 2nd floor store rooms reached by a staircase. Behind the store is the residence dominated in front by the alter to the ancestors. At least two courtyards open the houses to outdoor light and rain water. Chinese architectural influence is paramount in these pre-19th century structures.

Most “tourist attractions” signal to me to “stay away,” but Hanoi’s Water Puppet Theater is unique and well worth the US$3.00 admission (for a front row seat). Started during ancient rice harvest festivals, the flooded rice paddies were transformed into magical puppet theaters. Puppets are a beloved form of entertainment throughout Asia, but these puppet masters control their elaborate characters from behind screens and actually under the water. Fire breathing dragons compete with dainty court dancers and palm tree climbing coconut collectors. A live orchestra in traditional dress playing on traditional instruments completes the experience as one of the best cultural venues in the city!

Cuisine is not Hanoi’s forte. There are a lot of places to eat and, as usual on this Earth, they’re mediocre. The finest restaurant in Hanoi is also the most fascinating. Koto, next to the Temple of Learning, is in an elegant, 3 story French art nouveau town house. Opening at 11:30 AM it is full within the hour. Founded 20 years ago by concerned Australians and Vietnamese, it is a culinary training school and refuge for disadvantaged/abused/orphaned young adults. If I had not known this in advance, I would have assumed it’s simply a superbly well trained staff serving creative dishes at moderate prices. It was the best meal I had in Hanoi. Cost for two was less than US$18.00

Unfortunately, many restaurants in Hanoi listed in guidebooks or on user reviewed travel sites were geared to tourists with Western taste (Australian beef burgers) and overpriced for the country. One important note of traveling in Vietnam is that it’s the least expensive of the Southeast Asian nations. A metered taxi (don’t travel any other way) is a couple of bucks anywhere within downtown, dinner for two with beer is under US$20, a first class hotel is overpriced if it’s rates are more than US$55-75, admission to any museum is a couple of bucks. I did have a very interesting, but not consistently well prepared, dinner at the top rated Highway 4, on a dark and dreary street north of the Water Puppet Theater. Deep fried crickets were fascinating – like eating feathery nuts, but beef flamed in foil was tough and other unexciting dishes were under seasoned. Although they advertise such exotic foods as Water Buffalo penis and fried scorpians, none of these were available. The Hotel Ho Guom, $55/double, was centrally located with an energetic and helpful staff – although the web site pics are better than reality. The room was comfortable and the breakfast provided a nice choice of traditional and Western foods.

Hanoi is not a comfortable city, and I’d suggest no more than a two day stay. Yet, for someone of my American generation it was an important visit. Barely avoiding the draft in the late 1960’s, brought up on  ideas of “communist domination,” it was valuable to learn that it truly was all lies. If Vietnam is a “socialist” state, Wall Street’s full of socialist. The war was a nationalist independence movement to throw off Western domination so that they could resume the rampant capitalism Vietnam always enjoyed before the French imposed their colonial regime. Vietnam succeeded, and if, along with their Chinese cousins, they eventually dominate Southeast Asia it will be through capitalist investment not ideology. 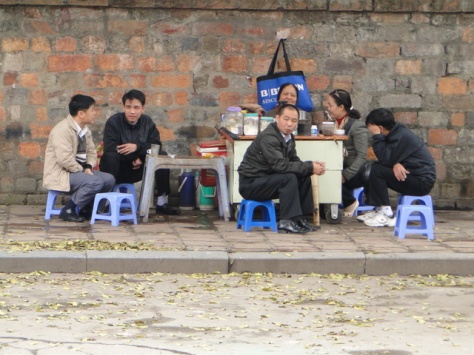 A beam of gold on this #sunsetsunday in @visitpuertovallarta #mexico #viewfrommywindow
Efficient use of #solarenergy in @visitpuertovallarta #Mexico! #streetscape #clothesdrying
“An exact replica of the famous “Santa María” from Columbus maiden voyage to the New World” the Marigalante Galleon @pirateshipvallarta is impressive in a @visitpuertovallarta #sunset on the #bahiadebanderas #mexicantravel #thursdayvibes #viewfrommywindow
On a hot sultry day in @visitpuertovallarta Chef Diego Gomez @qulturepv knows how to construct a dish satisfying to #appitite but light on this humid #foodiefriday - tender, seasoned grilled chicken on #cibattabread paired with an equally eye pleasing salad of #babyspinach fresh #strawberries & #sliveredalmonds. #culinarytravel #mexicanfood
Raindrops in the pool, bird, #bahiadebanderas - elements of the #rainyseason at the #magichour @visitpuertovallarta
Chef Diego Gomez creates dishes as artistic as the art filled Qulture Restaurant/Gallery/Bar in @visitpuertovallarta, #grilled #salmon on #aspersgus with #roastedveggies #rissoto @qulturepv #mexicanfood #culinarytourism
My #grandson Harlan amazed at the size of an Alaskan #crableg. How many of you (us) remember discovering with the wonder things that we could eat, taste terrific & turn out to be #healthyeating. He’s 1/2 through an #alaskancruise with his family. (PS: both he and #grandaughter Elena have as I can tell no concept of “food phobias”). Warms my #chefs heart. #culinarytravel #USAtravel
I like #coconut & at Qulture Restaurant /Bar/Gallery Chef Diego Gomez makes an intense #coconutpie - more a moist pastry than a North American coconut custard pie - topped with #italianmeringue with berry purees. On the menu it’s a “Yelapa style coconut pie”. @qulturepv @chef_diegogmz @visitpuertovallarta #mexicanfood #mexicanpies #culinarytravel
I live 3 blocks from the 7th largest #bay on Earth, the Bahía de Banderas, on the #pacificocean. yes I’m #privileged @PuertoVallarta
Happy National Donut Day (1st Friday of June in the USA). Varieties of fried leavened #breads are worldwide, but the 1st #recipe is from Germany 1480s & the #donuthole appears mid-1800s. These #donuts🍩 are from @milis_bakeryshop @visitpuertovallarta #Mexico. #foodiefriday @natdaycal
A rich, #chocolatecake with #chocolate & #vanilla #buttercream #frosting & #fillings (w/a thin layer of peaches on bottom) & topped with Ferrero Rocher #hazelnut candy as a gift last week for my #birthday from my dear friend @germancurielayon from @milis_bakeryshop #chocolatelovers #bakingartistry
Calle Carranza (block up from my apartment) is just 1 of many beautiful streets in #historic El Centro @visitpuertovallarta still lined with many #historichomes. #historicpreservation #Mexicotravel
A #viewfrommywindow of last night’s 2022 Puerto Vallarta #gayprideparade (a major event in this city) & #sunset. @gay.pridecdmx @visitpuertovallarta @mexicoguide
Silhouette at the #goldenhour in @visitpuertovallarta #Mexico #birdsofinstagram
The life of a writer at Happy Hour (it’s a #Malbec…)#viewfrommywindow #happyhour #mondayvibes #travelwriter
Thank you all my friends for Happy Birthday wishes yesterday. I know I’ve been taking a break past couple weeks from social media to work on other issues. So basically a quiet day with some friends & in lieu of a cake I made Chocolate Walnut cupcakes with caramel & chocolate topping.
Friday’s #goldenhour certainly is golden this evening @visitpuertovallarta #mexicotravel #viewfrommywindow #fridaymood #bahiadebanderas #pacificocean #horizon
Simple beauty #roseoftheday #sundayvibes
In my #tropicalgarden #orchads framed in #palms. #mexicangarden #tuesdaymood #smallgarden #pottedgarden #tropicalliving