Actually the Buddha never visited Chiang Mai no less move there, but legions of his devotees have over the centuries from around the world – India, Laos, Vietnam, China, Australia, France, England, Canada, America. Not all of these expats are Buddhist.  Hinduism from India arrived first, a few thousand years ago, followed by Buddhism somewhere around 500 AD, and all had no real issue with local Animist practices, Confucianism brought by Chinese merchants and Christianity when Europeans arrived after 1500 AD. After all, what we know today as Chiang Mai has been an important city since its turbulent days as the capital of the Lanna Kingdom, wars with its arch-enemy Burma, Japanese occupation during World War II, its rise as the cultural heart of ancient northern Thailand and even the onslaught of overfed Western expats looking for a low cost of living and cheap facelifts.

As flexible as Buddhism is, modern Thai’s have few issues with Starbucks, cell phones or even fat expats, but the shorts for sale in the upper right picture are strictly for foreign women (unless you want to be a Thai woman with a tarnished reputation) and no Thai guy would go shirtless unless at the beach – which is no where close to Chaing Mai. That said, Chiang Mai is not an attractive city. Many of its old teakwood structures are found scrunched tightly among mold stained concrete buildings of more recent vintage. Like most Southeast Asian cities, sidewalks crumble under persistent floods of the Ping River during rainy season, their primary use as motor bike parking lots and spontaneous “stores” for sellers of everything from sunglasses to spicy hot chicken feet.

Like most of regions of the world with hot sunny weather, walking would seem to be the obvious choice to see the city, but this is Southeast Asia. Although many people do walk – certainly far more than any American city – “pedestrian friendly” is a concept that’s not part of Asian consciousness. With few walkable sidewalks, one shares the often narrow streets with cars, trucks, motor bikes and other forms of public transportation  in a devil-may-care free-for-all. Chiang Mai has few traffic lights, except in some places on the  modern expressways in the new outer parts of the city, and fewer police to calm the constant rushing traffic. To cross the street a pedestrian simply crosses the street into the traffic which frequently comes from all directions. Although daunting at first, this is exactly what the on-coming traffic expects as it, usually, avoids both pedestrians and other vehicles with deft agility. The worst action a pedestrian can take is to get spooked and hesitate halfway across several lanes of traffic – that’s when the cars and motor bikes get spooked and “problems” occur.

Most Thai’s without their own transportation ride the Songthaews – converted small trucks that carry up to a dozen people at a fixed rate along fixed routes like buses. They’re cheap at about $.35 – $.70 US a ride. The Saamlors and Tuk-Tuks are for short distances especially within the Old City and its immediate surroundings. There is no problem getting a Saamlor or Tuk-Tuk because their drivers “believe” that no one wants to see the city by walking. They are everywhere, and you’ll be asked by nearly every one during your walk if you “want a ride?” “where are you going?” and “one hour to see the city?” The trouble is that there are no set rates and no meters and the “one hour tour” is to any number of shops selling items you do not want but for which the driver gets a cut. To say there is a “sliding scale” on the rate is an understatement. Locals know the game quite well and the distance. What will be quoted to a local frequently is 50% – 75% less than to an obvious foreign visitor. If one does not haggle over the fare before the ride expect to pay as much as the driver believes you’re gullable, or guilty enough, to pay and be asked about “a tour” or “a good shop…” (Actually you’ll be asked this even if you do settle on a price but just be firm because the shops are rarely ones you would visit on your own.) Never expect to pay the same rate for any two rides to or from the same place. Yet in 95 degree (F) heat at 3:00 PM you might not care about the fare. On the other hand, any fare over 100 BHT ($3.00 US) to just about anywhere within center city is too much. Taxis with meters exist but your hotel must call them. They’re rarely available to flag down.

So why visit such a chaotic city? The people for one thing. The average Thai is friendly and gracious even if they’re scamming you or you’re not buying something. They’re so industrious – and I’ll add the Laotians, Cambodians and Vietnamese – they make the average workaholic American seem lazy. Nearly every building is a store with family living quarters in the back or above. Motor bikes and bicycles are movable stores or “freight” haulers. Where there isn’t a motor bike parked on the sidewalk there’s most likely someone who has set up a “café,” or selling jewelry and T-shirts, or water and soda, or even making fresh dumpling pot stickers. Whether the nation’s a monarchy or a “socialist” republic, Southeast Asians can’t count on a pension (unless they’re the favored few that work for large corporations) and “social security” is an unknown concept. The extended family is one’s social security and the ability to be creative with work.

There are the 300 Buddhist temples in Chiang Mai and the surrounding countryside that are oasis of calm in a busy city as well as repositories for a millennium of stunning art, architecture and knowledge. Nearly all are open to the public most hours of the day.

There is the beautiful green countryside with villages, farms, mountains, waterfalls – and tourist traps (oh well…). It’s not surprising that as a national medical center (and for an American inexpensive care), slightly lower temperatures than steamy Bangkok, especially November through February, along with a cost of living less than half that of North America and Europe, Chiang Mai attracts one million tourist a year, over 10,000 permanent expats and numerous seasonal residents. Like everything in Southeast Asia, Chiang Mai’s an experience worth a return visit. 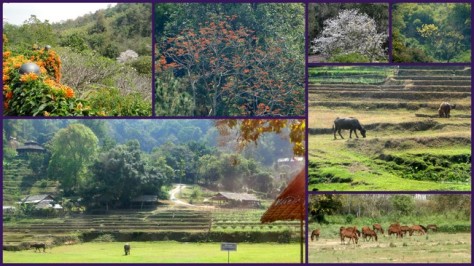