Vietnam:  jungles, mountains, green and 1,956 miles (3260 km) of  coastline (not counting islands)  much of it pristine, undiscovered, wide, white sand beach. “Undiscovered” by a beach-hungry Western tourist world but for how long? 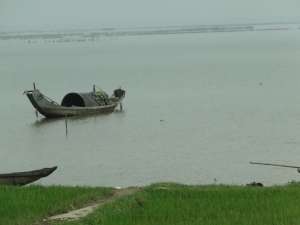 The 65 mile (110 km) trip from Hue to Hoi An is a beautiful coastal drive past fishing villages, wet lands and rice paddies with the road winding through the hills of the Truong Son Mountains. The postcard fishing village of Lang Co is situated between the Pacific and a perfect crescent lagoon dotted with boats. Tourism investment money is starting to develop the beach towns, but it will, hopefully, be some time before they’re condo canyons.

We were on our way from Hue to the UNESCO Heritage village of Hoi An, some 10 miles south of Da Nang. From Hue the passenger train line from Hanoi to Ho Chi Minh City (Saigon) hugs the same coast as the coastal highway, a 4 hour trip to Da Nang. From Da Nang you catch a taxi to make the 30-45 minute drive to Hoi An (cost $28 – $45/double train and taxi). As beautiful as the rail trip would be, I chose to arrange for a car and driver to make the trip to Hoi An with the option of stops on the way. For US$60/double this was a terrific day trip as well as transportation to our next destination.

I would have enjoyed wandering around the village of Lang Co, but on this day it was primarily a lunch stop. The Thanh Tam Seaside Resort is nicely designed. The main reception building contained a spacious restaurant decked over a sloping hill and opening onto a sweeping view of the Pacific at palm tree-top level. The palm trees create a large shaded sitting area at beach level. The rooms for the hotel were in separate beach front buildings. I did not see the rooms but TripAdvisor reviews are not kind. Of course there was a large store selling jewelry and clothing. There was no competition on either side of the resort for the peace of an enormous stretch of sand with beautiful views of the mountains.

For a tourist resort, the restaurant was surprisingly good. Specializing in seafood, there was a fine selection of grilled clams and oysters topped with a variety of savory sauces. Spring rolls were delicate and lightly fried. Prices were at the high end for Vietnam meaning that lunch or dinner for two will average US$25/30. (Our light lunch with espresso was $18/two).

The Hai Van Pass is the reason for making the overland trip by car – or if intrepid, by bicycle. The train dramatically hugs the coast around this finger of the Truong Son Mountains that literally juts into the Pacific Ocean creating a 1500 foot (497 m) barrier geographically dividing the country north and south. By car Highway 1 switchbacks up lush mountainsides, brushing clouds, opening vistas of the blue ocean set against the intense green of farm fields. This mountain barrier creates the moist microclimate that makes Hue and the Perfume River delta a unique ecosystem.

For over 1,000 years, Hai Van Pass (Pass of the Ocean Clouds) was the boundary between the Kingdoms of Vietnam and Champa. Even after the final conquest of Champa by Vietnam’s Nguyen dynasty in the early 19th century, the Pass was deemed a strategic position through the Vietnam War. Pill boxes are next to a 19th century watch tower. Today the site’s a rather windy, shabby remnant of a violent past. One side of the road is lined with the ubiquitous tourist stalls selling the same trinkets, water, soda, cigarettes, scarves, postcards etc that you’ve seen so many times already. Your car literally will be surrounded by well meaning and persistent sales women. I admire their persistence, even while regretting that I do not need what’s for sale, because it’s certainly a peaceful pursuit after this site’s violent past millennium.

Having traveled to both Cambodia and northern Vietnam, I could see and understand the distinct break in artistic traditions between the Chinese Confucian influenced north Vietnam and the Hindu/Buddhist/Khmer Champa Kingdom of the south – there is a cultural divide. Da Nang’s Bao Tang Dieu Khac Champa Da Nang (Museum of Champa Art) is both a gem and the world’s largest repository of the exquisite sculpture of this civilization.

The rapidly sprawling rather charmless city of Da Nang looks like a new settlement. If there was a historic core or a building prior to 1975 it’s well hidden. Being both a major port and air base during the Vietnam War did make it a prime target for severe damage. With modern Vietnam’s penchant for getting on with the future there’s little to no evidence of that past war. Yet Da Nang’s future fame will result in the development of its miles of stunning beaches. Australian money has already begun to pour in starting major golf/hotel/condo resorts. Iconic China Beach is highly desirable real estate. Da Nang’s airport is undergoing major expansion. I know it would be politically correct to decry this future loss of pristine nature, but also patronizing. This is an ancient land. It changes.