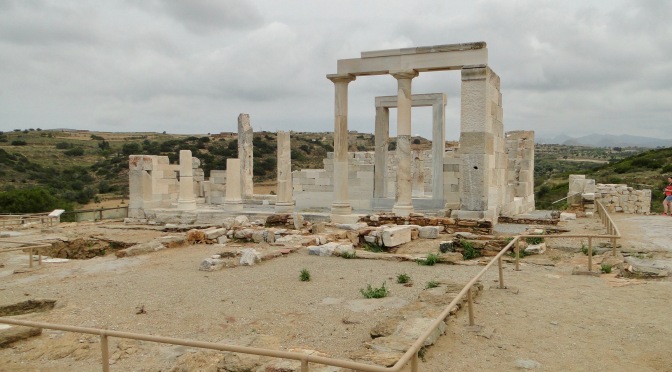 Delos was firmly established as a spiritual center by at least 2,000 BC.  Apollo was born on Delos, but the island did not need Apollo’s stardom even in antiquity. At its zenith in the 8th and 7th centuries BC, Delos was the wealthiest city in the Hellenic world.

Known for its agricultural abundance, Dionysus, god of wine, theater and love, is the protector of Naxos Island and the Small Cyclades. The island provides much to make the god’s stay comfortable.

It was on Mykonos that the young Zeus defeated the Titans, emerging as King of the gods…than the Golden Butler arrived…

read more in the Hellenic News of America

You can read more articles by Marc d’Entremont at:

Hellenic News of America (Travel with Pen and Palate)

The old tire wasn’t originally hung for a #hen to lay her eggs, but I can understand. Snug and with a view to help her through the long weeks of sitting. #chickeneggs #tuesdaythoughts #animalphotography #chickenfarming
In a swirl of rain water on a typical stone street in El Centro @visitpuertovallarta. #rainyseason #streetscape #tuesdaymoment
Different #sunsets two nights in a row over the #bahiadebanderas. One reason those of us who live @visitpuertovallarta love the #rainyseason - #clouds. #sunsetphotography #sunsetsunday #viewfrommywindow #nature_brilliance
Have you ever had Russian Pelmeni. I’d not until a few weeks ago. With their light texture & savory flavors (frequently a ground beef stuffing) #pelmeni have more to do with oriental #dumplings rather than perogies or ravioli. Their origins are lost in the mist of time but believed to have developed in Central & Eastern Russia (Silk Road cuisine). Either simmered in water/broth (photo 1) or sauteed (photo 2) they remain a favorite in #russiancuisine. These were made by Chef Diego @qulturepv for a party. #foodiefriday #internationalcuisine #russiancooking
The pomegranate has been a fabled fruit (technically a berry) since ancient days. Native of present day N.E.Turkey/Afghanistan, its health benefits have been known for eons. The #pomegranate is enmeshed with Mediterranean/ Mid-East cultures. It’s prized in #greekcuisine. The Peloponnese has been a main growing region for more centuries to count & honors this colorful berry in @ermine_greece with a #festival in October (2021 schedule 23-24 Oct). #healthyfood #ancientfruits #middleeasterncuisine #throwbackthursday #foodfestivals #greekfestivals #culinarytravel
In Puerto Vallarta, #Mexico, #fireworks are a common event. There was a particularly nice display #sundaynight off the Malecon for Puerto Vallarta Anniversary Day. Even better since I get to see them all. They’re the #viewfrommywindow @visitpuertovallarta #localfestivals
night light. #viewfrommywindow @visitpuertovallarta
A simple Mexican Chicken Soup for #foodiefriday. But simplicity does not diminish the flavors. #mexicanfood #chickensoup #culinarytravel #mexicancuisine @visitpuertovallarta
Bell tower & dome, Church of Our Lady of Guadalupe @visitpuertovallarta. This is the view from behind on Calle Matamoros. The bells are still hand rung after over 100 years. #mexicanculture #architecturaldetail #churchbuildings
A #birthday tradition in my condo building @visitpuertovallarta is to have your apartment door decorated by neighbors if it’s your B-Day ( it was mine yesterday) AND receiving food gifts. I got 2 cakes: a #carrotcake made by good friend @germancurielayon & a #manderineorange cream #birthdaycake from another guest, @nellyovillad, at a small birthday dinner party.
Smoked Marlin Tacos was my #beachfront #lunch on this beautiful #foodiefriday at El Barracuda just a few blocks north of the Malacon @visitpuertovallarta @elbarracuda_elsolar #dinesafe #beachfrontdining #fishtacos #localfish #mexicanfood #culinarytravel
I particularly enjoy Fromage de Chevre (Goat Milk Cheese or Queso de Cabra). The savory, mildly sharp, slightly tart taste & creamy texture pairs well with dried fruits, nuts & herbs as these festive “cheese balls” display in a #Paris shop. #foodiefriday #culinarytravel #frenchcheese #throwbacktravels
I often find doors fascinating especially when traveling. They make for good day dreaming - what’s life like behind a palace door or a well worn entrance to somewhere in a wall. These are #doors of #morocco from 2017. @visit_morocco_ , #northafricantravel #architecturaldetail #internationaltravel
As a #traveltuesday memory of living in #Philadelphia, the Ft. Mifflin National Historic Landmark (a Philly hidden gem!) is on Hog Island along the Delaware River surrounded by protected marshland. Ft. Mifflin played significant roles from the Revolution through WW2. Now add, for an aerophil (“one who loves aviation”) jets taking off & landing at next door Philadelphia International right over your head. (Ft. Mifflin is open according to their website. I can make an assumption having been there in the past you can visit safely, re: Covid, given its layout/location). @thefortmifflin #travelwhensafe @visitphilly @visit_pa @phl_airport @nationalparkservice #travelusa #culturaltravel #historicsites #urbanlandscape
You know how certain foods just make an indelible taste memory in the brain’s “pantry”? Palati Restaurant in the heart of Thessaloniki’s Ladadika, makes ageless traditional Macedonian/Greek Spice Road dishes. #Mussels in a creamy Mustard Sauce and Feta with crusty bread is one of those I dream about. #foodiefriday #greekfood #culinarytravel #seafood @thessaloniki.travel
In this time of caution concerning the wider world, serenity can be found in the micro world of home. I took this photo about 10 years ago in Aix les Bains, #France – the dishes in the window, the charm of the shutters, the contrast between the soft peach color & peeling paint of the walls – a comforting lived-in feel. #throwbackthrusday #travelwhensafe #earthdayeveryday
A solitary ship on water conjures serenity whether (1) shrouded in fog in the harbor of Portland, ME, (2) sitting in tranquil water in Vietnam’s Halong Bay or (3) catching the breeze off Bellingham, WA. @visitportland @halong.bay @cityofbellingham #traveltuesday #traveltuesdaythrowback
Today, April 19, is National Garlic Day so why not a dish of Roasted Garlic Ice Cream (smooth sweet/savory) to celebrate. You can discover a variety of good #recipes on the net (roasting tampers down garlic’s intensity considerably). Once attending the Pocono Garlic & Harvest Festival in East Stroudsburg, PA, I had Manning Farm Dairy’s Roasted Garlic #icecream and experienced a sizable sample of the world’s 600 varieties of #garlic. @pghfestival @manningsfarmhouse_kingston_pa #culinarytravel @visitpennsylvania #foodfestivals
On a press trip some time ago (@visitflanders, @visitbrussels) I was introduced to the world of Belgian comic books. For over a century Belgians (Flemish & Wallons) have been creating an internationally acclaimed literary niche that somehow entertained and bridged a cultural divide. While in Brussels wander the streets on an interpretive walking tour admiring original wall illustrations depicting these larger-than-life “influencers” on Belgian culture. #comicbooks #culturaltravel #literature #europetravel #travelwhenitssafe
From a 2016 trip to Jordon a view of 1st century AD Roman ruins from the Citadel of Amman. Yet there’s evidence of occupation since 1800 BC, capital of ancient #Jordon Kingdom from 1200 BC and under a variety of empires through the 19th century. The Citadel of #Amman is considered to be among the world's oldest continuously inhabited places. @visitjordan #culturaltravel #antiquities #romanruins #middleeasttravel #traveljournalist #saturdayvibes