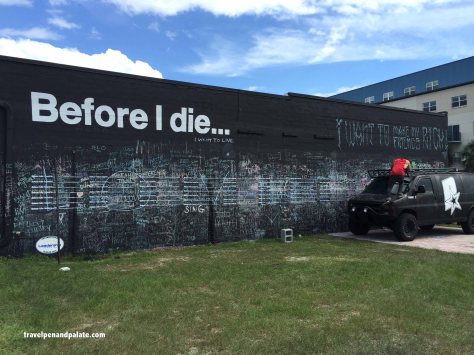 I dislike the term bucket list. I especially dislike it when it’s attached to travel. Adventure and exploration should be the impetus for travel, not checking off a predetermined list of must-see destinations.

Yet when it comes to life, reflecting on one’s innermost aspirations is healthy. How often do we express, especially to ourselves, “No, I can’t do that.” I’m not capable, talented, have no time, I’m afraid. 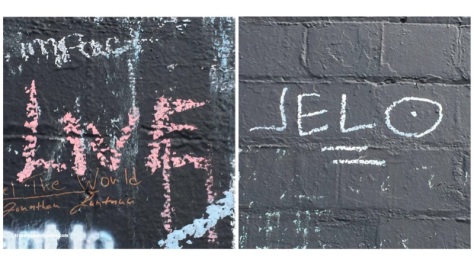 That’s the thought behind Saint Petersburg’s “Before I die…” wall located at 1049 Central Avenue in the heart of the Grand Central Arts District. A safe place to publicly express our aspirations shares a street bustling with cafes, art galleries and murals created by some of the city’s most talented artists.

A plastic bag of large colored chalk is available for all to use. The Before I die wall project started in New Orleans several years ago and has grown in popularity. I found it challenging, which sounds odd for a professional writer.

I also found reading the wall profoundly moving. I didn’t want to leave. I felt inspired and humbled by the aspirations of others in a way no bucket list blog ever achieved.

Saint Petersburg has been undergoing a major revival ever since the late 1990s despite the 2007 recession. Sprawling neighborhoods that radiated from a once decaying downtown were inconsequential to the trend towards the urban renewal of the 1960s-1980s, which often resulted in the destruction of low-rise residential and commercial streets. In the past decade a steady influx of young professionals with families, artists and entrepreneurs have found a treasure trove of Craftsman and art deco housing and sturdy commercial structures. 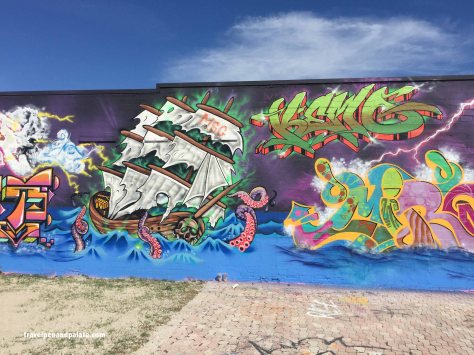 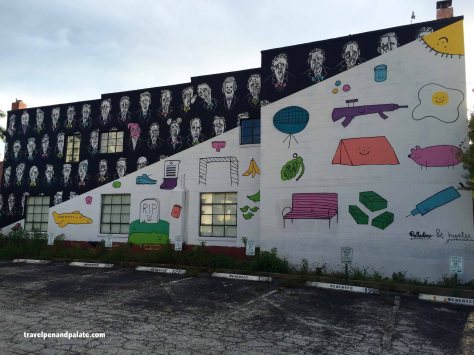 In an enviable partnership between business owners and artists – some who got their start defacing decaying buildings with graffiti – vast walls have been transformed into stunning murals. 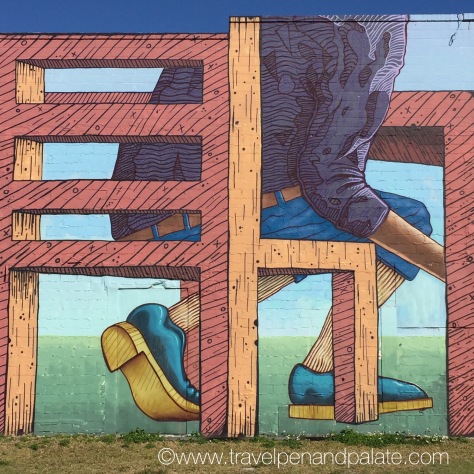 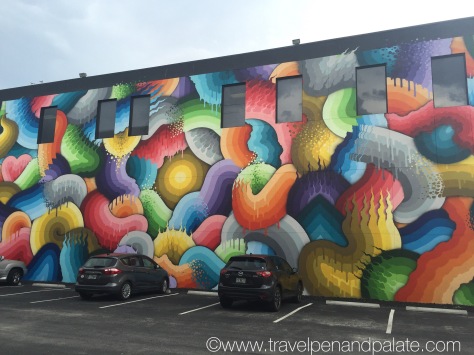 The nearly 50 murals decorate walls in Saint Petersburg’s seven arts districts. And they’re not defaced. Provide a neighborhood with beauty and it will be respected. 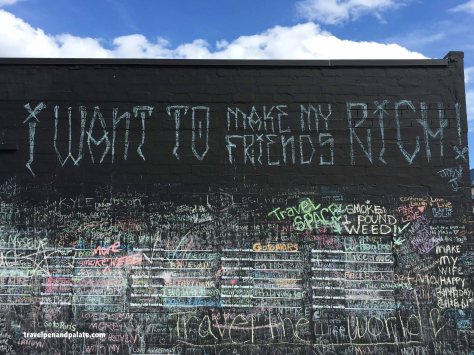 Perhaps the greatest of human aspirations, when given a chance, is simply to be good.

You can read more articles by Marc d’Entremont at:

The “Bridge of Love” in Puerto Vallarta was designed as a replica of Venice’s Bridge of Sighs and connects Casa Kimberly (left) to the more modest house owned by Richard Burton. Burton bought Casa Kimberly in the 1960s for Elizbeth Taylor. It connected the 2 houses through both their marriages, divorces & remarriages. The two houses today are the @casakimberly boutique hotel in El Centro‘s “Gringo Gulch” ... just down the street from my home. PV is full of stories. @visitpuertovallarta #hollywoodlegends #architecture #historicdistrict
Had dinner last night at a hidden gem in @visitpuertovallarta La Fina Cocina de Barrio. It’s a small place with outsized imagination. After my forthcoming article it may not be “hidden” for long. @la_fina_cocina_de_barrio #mexicanrestaurants #hiddengem #foodiefriday
A #throwbackthursday photo from inside the Museo de Sitio de la Cultura Teotihuacana looking over a scale model of #teotihuacan out onto the nearly 2,000 year old Pyramid of the Sun - 3rd largest in the world. #archaeology #mexicanheritage #mexicantravel #culturaltravel
1st Birthday’s are monumental 🥳 & my #granddaughter Elena Lucia d’Entremont celebrates in style. 😘 (I’ll meet her for the 1st time in January.)
I’m not a #vegan; I’m a #chef who likes & will eat just about anything. I enjoy #vegetarian & vegan dishes as much as a grilled rib eye. In Puerto Vallarta I often hear from visitors that “Mexicans only eat meat,” but a few hours at any market will end that myth. Many restaurants offer vegetarian & vegan options such as this savory, aromatic & filling #cauliflower #curry by Qulture’s Chef Diego Gomez - one of several vegetable protein selections on the #menu that make @qulturepv a #foodie destination in @visitpuertovallarta @chef_diegogmz #veganfood #mexicanrestaurants #culinarytravel #hometownfood #destinationrestaurant
The rainy season is over in Puerto Vallarta, #mexico, and flowering plants are starting their dry season/winter long riot of colors, such as these #Bougainvillea. #tropicalplants #tropicalvibes #viewfrommywindow #tropicallife @visitpuertovallarta
The newest wall mural to brighten an already art filled Puerto Vallarta. You’ll find this one at the intersection of Calle Iturbe & Calle Juarez in El Centro @visitpuertovallarta. #streetart #wallmurals #urbanlandscape #mexicanart
La Cigale French Bistro in El Centro, Puerto Vallarta, Mexico serves classic #bistro cuisine in a charming atmosphere both on their terrace & dining room. (1) #artichokes were steamed then char grilled adding an aromatic smoked flavor. (2) Vol au vent pastry was filled with #scallops & #mushrooms in a #champaign sauce. @cigale_french_bistro @visitpuertovallarta #frenchrestaurant #foodiefriday
Dubbed the “marble fields of Greece” the Greek & allied World War 1 military #cemetaries offer a sober reminder of the pain of war. (1) Zeitenlik Allied Military Cemetery, Thessaloniki (2) Dorian Military Cemetery, Lake Dorian, Macedonia (3) Lambet Road Military Cemetery, Thessaloniki. #worldwar1 #greekhistory #remembrenceday #veteransday #costofwar #throwbackthursday #greektravel
Today is the 3rd anniversary of Qulture, Puerto Vallarta’s unique restaurant & art gallery, which represents 17 artists who display their works & work in individual studios in a historic early 20th century building. This #mesoamerican inspired paper mache head is by artist Chez Manaca. @qulturepv @visitpuertovallarta #localartists #mexicotoday
I always enjoy walking past the potted garden that decorates Florios Restaurant in El Centro @visitpuertovallarta @floriosvallarta #streetscape #urbangarden
...and the #wave rolls in at the #malecon @visitpuertovallarta #bahiadebanderas #mexicomagico #pacificocean
November 3 is National Sandwich Day! I love sandwiches. The Earl of Sandwich popularized this fast food (in its present form) In the mid-1700s, and it swept the world. I probably eat a sandwich a day ranging from raw herring to the ubiquitous ham and cheese. And I seek out interesting sandwiches during my travels. Here’s a small selection:
Walking down Calle Mina (block over from home) to Gaby’s for their classic Chicken Mole @restaurantgabys #mexicanfood #chickenmole #foodiefriday
Fishermen with #seagull “crew” along for the bounty in the #bahiadebanderas @visitpuertovallarta #mondaymorning
Memories of the Argentine resort city of #Bariloche offers panoramic views of Lago Nahuel Huapi & the snow capped #andesmountains. @visitargentina #skiresort #southamericantravel #argentinelakedistrict
Paintings by Curioso and coconut shrimp by Chef Diego Gomez. Enjoy both at Qulture, Puerto Vallarta’s only #restaurant #artgallery. @qulturepv @visitpuertovallarta
On a trip to Costa Rica (2016) I was taken down the Sierpe River to Corcovado National Park - an enclave containing 2.5% of Earth’s biodiversity. Of course there are always some where social distancing is recommended...
Sunsets are always fascinating since no 2 are ever alike even on the same day no matter where on Earth. For #sunsetsunday here’s a collection from my travels. (1) the Dead Sea, Jordon (2) Eastern Highlands, Zimbabwe, (3) Puerto Vallarta, Mexico (4) Dublin, Ireland (5) Over the Mekong River, Laos (6) Pula, Croatia, (7) on top of Mt. Athos, Greece. #internationaltravel #nature_brilliance
Mango ... 😋 #tropicalfruit